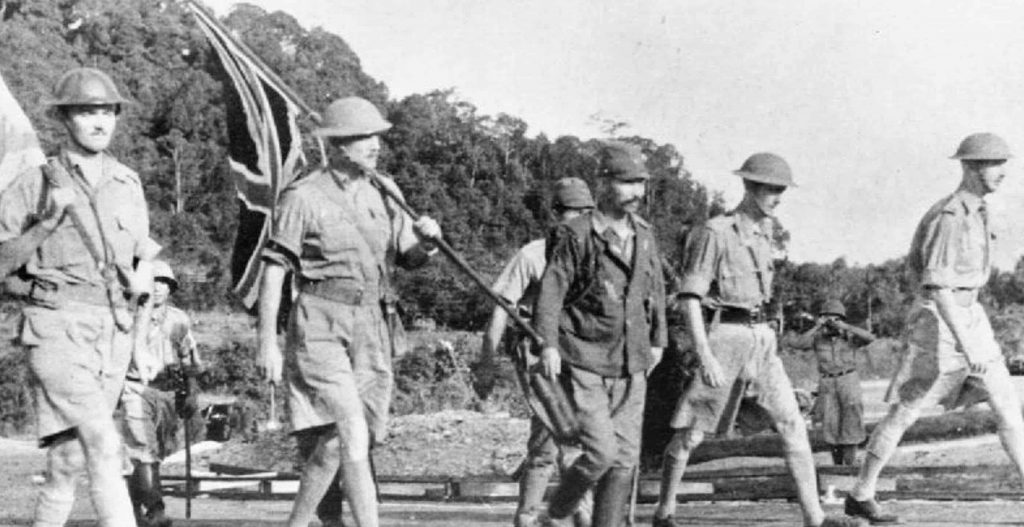 On the way to surrender
(image in public domain)

Singapore........A paradise of British charm and elegance, where late afternoon tea and conversation on the terrace of a hotel or café was common practice for resident European citizens. In the bustling shopping streets, elegantly dressed ladies view shop windows while children are entertained with an "ice cream" and gentlemen discuss their prowess in the previous evening's poker game...a true European capital outside of Europe.

On top of all this, Singapore was also the British pride of Asia, a veritable impregnable fortress, "stuffed" with bunkers, trenches and artillery pieces that would make this colony capable of resisting any attack that might eventually be launched against.... or so it was thought.

All the Japanese military movements of December 1941, indicated that war "would be on the way" and on February 15, 1942, Singapore "fell" right into the hands of the Japanese attackers.

With the capture of this British "stronghold", tens of thousands of allied soldiers were sent to prison camps, being subjected to mistreatment, starvation, disease and all sorts of atrocities. Among the thousands of prisoners, there were some Portuguese and Portuguese descendants.

Prisoner records where Stanley`s name can be seen

Stanley Joseph Conceição, military volunteer Lusodescendant and integrated in the unit "Straits Settlements Volunteer Force", was one of those captured during the fall of Singapore. Being on guard in the quiet "Meyer Road", he could only hear explosions in the distance until he was told that the Japanese had entered Singapore and that he should report immediately to "Scotts Road".

Armed with a Lee Enfiled rifle and only two "magazines", he later reported to the new post. In this locality and in the centre of an intense rush, he was ordered by his sergeant to hold his new post until further orders.....These orders came shortly afterwards with information of the British surrender and that he was again to wait until further notice.

Not knowing what to do, Stanley, waited, several hours passing with no news from his officers, until an astonished sergeant running "up the street" shouted at him from the opposite side "to run because the Japanese were down the street". His first interaction with the Japanese military came moments later when he was arrested by Corean guards (part of the Japanese forces) and taken to other Allied prisoners, followed by his first march to the Changi prison and internment camp.

Carrying all his possessions with him, he marched in a group of about a hundred prisoners through streets "crowded" with curious civilians who gathered to watch them, under the watchful eyes of the Japanese guard.

At Changi, Stanley, was initially responsible for the creation and daily maintenance of the camp's sanitary system, in particular, pits and drains but also the burials of bodies of the deceased that were scattered on the beaches of "Changi Point". He was later transferred to various other small camps around Singapore, until after six months, he was told by an English officer that because he was considered "healthy enough", he would be sent to Thailand.

Unaware of the dangers and future events of the work on the "Thai-Burma" railway, Stanley, full of morale and together with some comrades from his "D" Company, went by train inside a freight car.

In a freight wagon, with about 30 to 40 people inside, he arrived in Thailand, where he would be transferred from camp to camp for bush clearing work and construction of the railway line and would have to struggle daily against ill-treatment, poor sanitary conditions, diseases, insects, snakes and scorpions.

With only two daily rations of rice and tea, he was forced to build bridges and the railway line for about three and a half years.

As time and years passed, numerous rumours of a surrender circulated through the countryside and the Japanese sentries became fewer and fewer and "nicer".

One day the arrival of a car, carrying two British officers, confirmed all these rumours, "you are free", they were told.