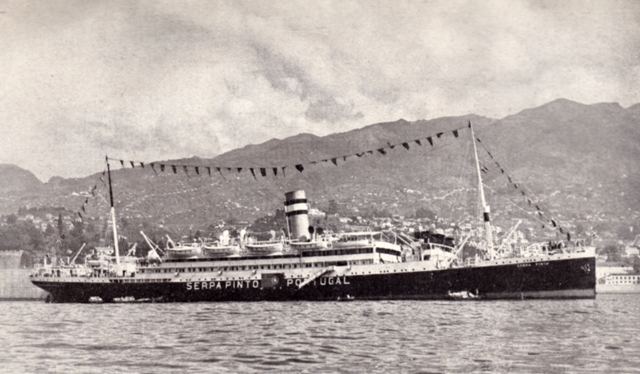 The "Serpa Pinto" with the paintings in the hull it used during the war
(Picture: Postcard)

The shipwrecked were spotted and picked up by the "Serpa Pinto", from the Companhia Colonial de Navegação (CCN), on October 8, 1940, 30 days after their ship, the "Antonios Chandris", was sunk by the German auxiliary cruiser "Widder".

The Portuguese passenger steamer was traveling from Lisbon to Rio de Janeiro, Brazil, when around 1 pm, near Cape Verde, some Serpa Pinto officials spotted the rockets being fired by the occupants of the lifeboat.

According to the Portuguese press after so many days at sea, the crew from the  "Antonios Chandris" had very low hopes of being found, and some had even left messages written on the life jackets in the hope that at least these could be found and their families could know their destiny.

Some of the castaways were so feeble that they had to be carried on the back of other up the ladders that had been launched to collect them.

After arriving in Rio de Janeiro, the 22 crew members did not wanted to stay in Brazil and preferred to return to Europe on the return trip, and on the morning of November 3, 1940, they entered the Tagus, where they had the chairman of the board of directors of the CCN, Bernardino Correia, as well as members of the Greek consulate general waiting.

The six officers and 26 sailors publicly thanked Captain Americo Santos for saving their lives, taking several photos that were published in several newspapers giving some publicity and prominence to the event.

The sinking of "Antonios Chandris"

Disguised as a merchant ship, the "Widder" did not look threatening, reason why it escaped a less attentive inspection of the enemy war vessels and managed to deceive the civilian ships.

This was what happened to the "Antonios Chandris" at the end of October 3, 1940. The ships crossed without the Greek captain George Gafos suspecting that there was an enemy in front of him, until he received the order to stop under the threat of the guns. Not a shot was fired.

Captain Helmuth von Ruckteschell sent a boarding group to the Greek ship with orders to place explosives on the hull in order to sink it.

With more than 140 prisoners on board from nine other ships that they had sunk since June, the German commander provided the Greeks with food and water, and ordered the  into the lifeboat, leaving them adrift. They would be found only a month later by the "Serpa Pinto".

This would be the last prey of Widder who was returning to Germany for repairs.