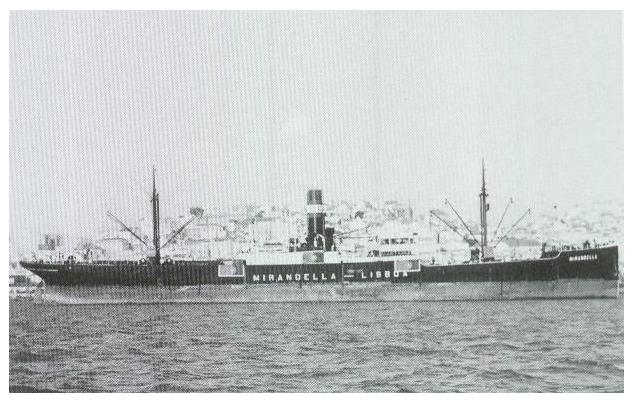 When Commander Oliveira, on the way to the Portuguese African colonies, tried to take them aboard, the officer who commanded the whaler refused and expressed the intention to reach Freetown instead. The rest of the crew also insisted on this.

The "Mirandella" sent several radio message warning any British ships nearby. It did not take long to be answered by one patrol boat nearby. The Portuguese master was also informed that another whaling vessel, whit the captain and other members of the crew, would not be far away.

By 9 o'clock the Portuguese ship left after providing the lifeboat with water, supplies, their position and the course for Freetown.

At 0940 hours a British light cruiser was spotted, and the Mirandella gave them the position of the lifeboat, about six miles from the stern. It was the "HMS Dragon" that, warned by the Portuguese radio, would soon later find the two lifeboats of the “Queen Maud”.

The sinking of the "Queen Maud"

The “Queen Maud” departed from Milford Haven, in Wales, on 11 April 1941 on a convoy, and on the 19th left the remaining ships to sail independently to Freetown in Sierra Leone. It carried military supplies and more than seven tons of coal.

On 5 May, at 08.00 hours, about 300 miles west of the port of arrival, they were struck by a torpedo that exploded inside the portside near the bridge. Some crew had still not realized what had happened when another torpedo exploded.

There was no explosion seen, no boiling or column of water, they only felt the impact from the weapon and saw a huge cloud of coal taking over the ship that began to sink quickly.

The crew was divided into two whaling boats and a raft. The latter, with five men, was caught by the collapse of the ship's superstructure when a third torpedo struck the “Queen Maud”, but almost miraculously all on board survived. They were taken in by one of the two whalers.

The castaways then decided to reach Freetown, even though the French Guinea was closer. It was during this journey that they found the Mirandella, that alerted the British warships to the their presence. The survivors arrived in Sierra Leone on 8 May.

The submarine that carried out the attack was the U-38 commanded by the captain Heinrich Liebe. There was one dead among the 44 crew.