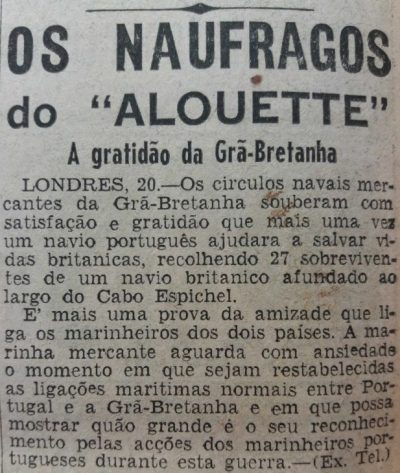 The Portuguese fishing boat Duas Gémeas entered the port of Setúbal, at 10 am on September 19, 1942, bringing on board 27 survivors from HMT Alouette, a trawler adapted to the anti-submarine service on the Royal Navy, sunk in the early morning by U-552.

Signal rockets fired by the men on a lifeboat and a raft had been spotted in the early hours of the morning. The English were lent clothes and offered food, wine and tobacco.

Seven were taken to the Hospital da Misericórdia in Setúbal. Two were interned and five, able to support transport, were transferred the same afternoon to the English Hospital in Lisbon.

The rest, already in civilian clothes, after spending the night in hotels and guesthouses also went to the Portuguese capital, first by car and then in the steamer Estremadura, which ensured a regular route across the Tagus river. They disembarked on the bridge of the south and southeast station at 18.30 hours.

Another officer and two sailors had already arrived in Lisbon after being found on a raft - about five miles from land - by the fishing steamer Ilha Graciosa, which docked at 11 pm of the 19th. Also in this case the castaways had fired flares after spotting the light of the Portuguese's Ship.

The British authorities would publish a public thank you note the Duas Gémeas company - Chagas Salgado & Cª - were presented with the lifeboat and the raft they had picked up with the survivors.

The HMT Alouette was hit by a torpedo fired by U-552 at 03:01 on 19 September 1942. The bow broke apart and sank, but the rest of the ship continued to float forcing the submarine to fire another torpedo which caused a big explosion and dragged it to the bottom. The survivors escaped in a lifeboat and two rafts. 14 crew members died.