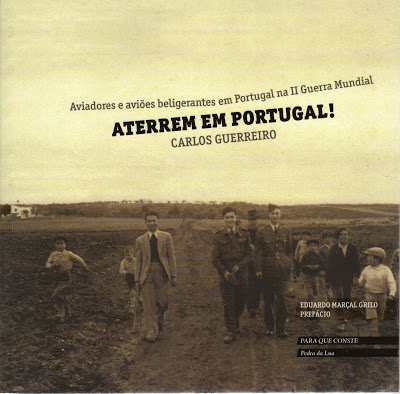 My name is Carlos Guerreiro, I am a journalist and for a long time I have also been interested in the Portuguese history of the Second World War period.

In the area of ​​journalism I worked with local newspapers and radios stations in the Algarve (South of the country) and also national publications such as “Diário de Notícias”. More recently I also worked with TVI (TV), Antena 1 (Radio) and RTP (National TV/Radio channel) where I am currently part of the Multimedia department.

In 2008 I published the book "Aterrem em Portugal!" (Land in Portugal!) which covered the history and the stories of airmen from belligerent countries who for various reasons finished their voyages in Portugal during WWII. In this site you can find a small part of that research.

Later I created the blog with the same name where for almost a decade I have been writing about Portugal and the conflict that between 1939 and 1945 devastated the world. In the future I hope to translate some of these stories in order to enrich this site, giving other details to those who do not speak Portuguese.

In the last years I led the research that allowed to find several refugees who passed through Portugal during World War II in order to leave their testimony in the documentary of Nicholas Oulman's "Debaixo do Céu" (Under the Sky), released in 2018, the year in which I also published my second book "The track of the Sun", about the history of Faro Airport.

I am also a media-trainer and I cooperate with newspapers, magazines, radios and televisions on issues related to World War II.

At the moment I'm finishing my Master Degree in Maritime History, studying the rescue operations made by Portuguese ships and the support to the wrecked crewmen given by the Portuguese authorities during WWII.

At the moment there are no other collaborators, but the site open to that possibility.