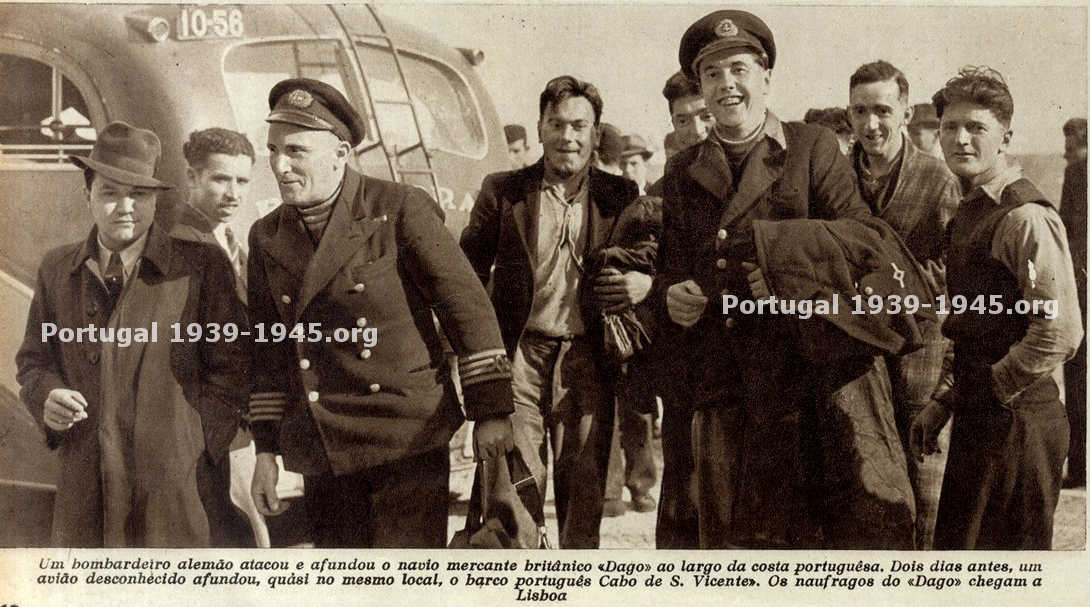 The attack on the British freighter Dago, carried out by a Luftwaffe Fw 200 Condor, was seen from land, leading the rescue-boat from Peniche, the Almirante Sousa e Faro, to leave in an attempt to rescue the men who abandoned it after he sank hit by several bombs on March 15, 1942.

One hour after the attack, the Portuguese were near two lifeboats with a total of 37 men. Fifteen from one of them, partially destroyed during the launch, were transferred to the Almirante Sousa e Faro, while the other was towed ashore.

They disembarked in the port of Peniche under the local firefighters searchlights and the help of the fishermen who got into the water, - some up to their waists -, to make them reach land safe, despite the strong swell. Transported to the Misericórdia Hospital all received medical assistance. Three of them presented more complicated conditions and needed special care, namely treatment for an asthma attack, a fracture in the right leg and a wound in the anus.

Those who were not interned traveled the next day to Lisbon in the company of 24 bottles of brandy offered by the population.

The Dago had departed Liverpool on February 21, 1942, bound for Lisbon, as part of the OG.80 convoy made up of 30 merchants and five escorts.

It carried 30 tons of merchandise including soap and machines. On the afternoon of 15 April, the ship left Lisbon for Leixões, but was attacked by the Fw200-Condor commanded by Lieutenant Otto Göse, which had taken off from Bordeaux-Merignac, France. The plane made two passes without firing while the British gunners tried to keep it at bay with machine guns and rockets. At the third passage, the aircraft fired its cannons and dropped three bombs that exploded in the forecastle, in an empty hold and in the water, next to the hull, dooming the ship.

One of the two lifeboats was hit by the propeller, destroying the rail and some oars. The other narrowly escaped as the Dago tipped over and sank.

The “Alferrarede” finds the survivors of the “Lucrecia”

Hellenic Trader survivors were towed by the Nacala