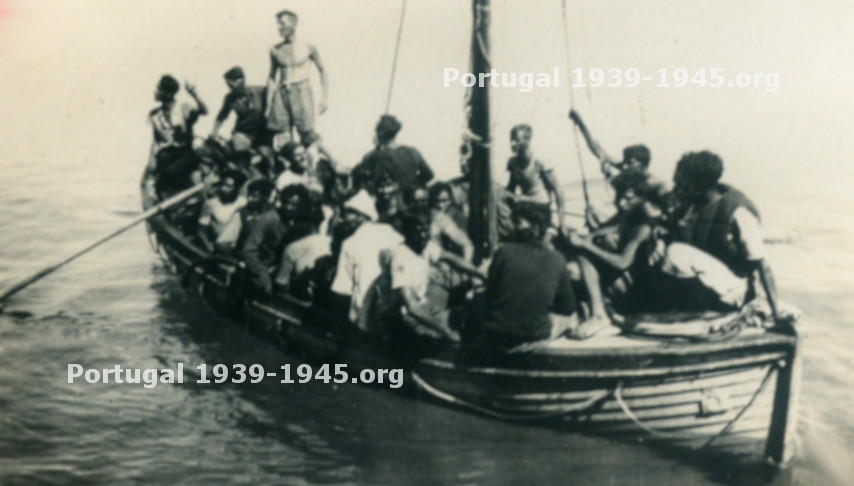 A rescue-boat from the Clan MacWhirter found by the Pedro Nunes
(Picture: Augusto Alves Salgado collection)

On the morning of August 31, 1942, when the Portuguese Navy Sloop Pedro Nunes was preparing to sail out of Funchal, a distress call was received by the Port authority, stating that a British steamer was in trouble 40 miles north of Ponta do Pargo, in Madeira Island. The radio had been picked up by the Portuguese steamer Congo which relayed it to the Portuguese authorities.

The Pedro Nunes left immediately and at 3.15 pm a rescue-boat, with 30 shipwrecked on board, was sighted. These were the men who - through a portable emergency radio - had launched the SOS heard by the Congo. They told the Portuguese captain that there where two more lifeboats. The search continued and by 23.50 hours a new rescue-boat was spotted when one of the ships projectors accidentally focused on it. No rocket had been launched or light signals made. Only a light on the mast, which from the ship looked just as another star, signaled the presence of 14 more men.

The he search continued, but at 5:40 pm the following day it had to re-enter in Funchal to leave the first group of survivors of the British Clan MacWhirter. There was an Indian crew-member seriously injured by shrapnel in need of special care. The two rescue-boats were left with the port authority.

The Pedro Nunes left again at half past ten, but they saw nothing until the next noon, when they received news from Funchal reporting a small boat with a red sail off Ponta de São Jorge. About 15:00 they saw her, already without sail and with the crew trying to find a place to land. Twenty minutes later, another 31 men boarded the Portuguese sloop.

This last lifeboat was taken to Lisbon and was offered by the owners of the Clan MacWhirter to the Instituto Português de Socorros a Náufragos (Portuguese Sea Rescue Institute).

At the beginning of October the castaways arrived in Lisbon. The British crew sailed to Gibraltar, while the second officer and chief engineer were repatriated on a plane from Lisbon to Bristol, UK. The fifty Indian crew followed in the Portuguese steamer Mouzinho to the India.

With machine problems the Clan MacWhirter was not able to accompany the convoy SL.119, and was alone when at 01:00 hours on the 27th of August it was hit by two torpedoes fired by U-156. The ship sank in about 10 minutes. Twelve men died, including the captain.