On May 29, 1942, at 11.50 am, the Portuguese steamer Maria Amélia spotted a submarine that was signaling them to stop and which, after approaching for about half a mile, left without any more communication or signal. In his report, Captain Vitorino Miranda believes he was German, although he did not see any identifying marks.

At 12:10 pm the Portuguese resumed the route from Lisbon to New York and, after 25 minutes, they spotted another bulking the distance and they thought it was another submarine, but it turned out to be a whaleboat with 14 sailors, that were collected at 1:25 pm. Ten were from the crew of the Dutch Polyphemus and four from the Norwegian Norland, who in a few days had become shipwrecked two times after being sunk and picked up by the Polyphemus that was also torpedoed.

On the 31st of May, the Maria Amélia - already close to the USA where she was heading -  was flown over, questioned and identified by one American aircraft and a destroyer. On the 1st of June they delivered the rescued and the lifeboat in New York and the Dutch consul paid them a visit thanking them for their rescue.

The crew from the Portuguese Mirandella, also in the route from Lisbon to New York, spotted another lifeboat from the same ship at 7.35 am on June 3, with 15 men on board, three of whom had also been part of the Norland crew. The exhausted crew received medical treatment for some minor injuries and were delivered - with the lifeboat - in New York on June 5, 1942. 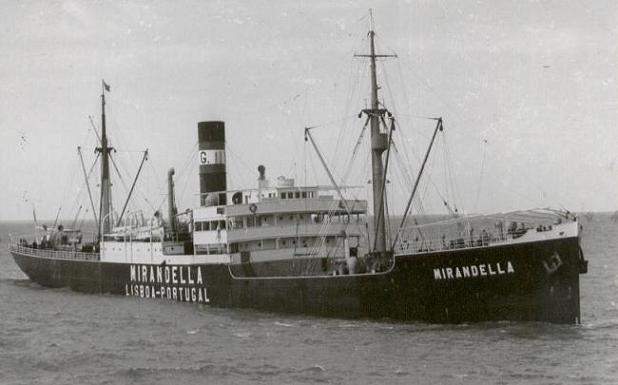 Of the other castaways – a total of 65 men – 10 were picked up on June 1 by the American fishing vessel Huntington Sanford. On June 13, two where found by the Norwegian Torvanger and another 10, on June 5 by the USCGC General Greene.

The Norland was sunk on May 20, 1942 by U-108. Five days later, fourteen of the crew were found by Polyphemus who, 24 hours later, was in the sight of U-578. Two torpedoes at close range demolished her stern and killed fifteen Chinese from the crew. Sixty-two survivors escaped in five lifeboats. The U-boat garrison questioned them, left them cigarettes and headed for New York.

The five lifeboats got separated on the second night. Shortly before being picked up by Maria Amélia, the castaways spoke with commander Kelbling of the U-593, and it was this U-boat that probably crossed paths with the Portuguese steamer Maria Amélia shortly afterwards.

Another lifeboat also encountered U-boats before being picked up by USCGC General Greene. First, on the 29th, with U-566, that provided them with water and, the next day, with U-593 that gave them bread and a bottle of rum.