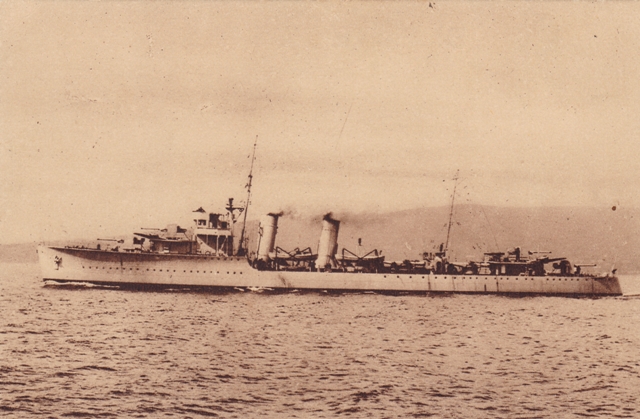 The Portuguese destroyer “Vouga” rescued, on 11th August 1941, 19 men from the steamer "Frankfurt", a German merchant scuttled by the crew after it was discovered crossing the Atlantic by the British auxiliary “HMS Cavina” days before .

20 crew members avoided imprisonment and escaped in a lifeboat trying to arrive in the Azores. On the night of 8 to 9 August they saw a steamer that turned out to be the Panamanian "Norden" bound for Lisbon.

About what happened next there are two different versions. The Panamanians claim that the Germans did not want to came on board because they were not sure of the vessel's neutrality, as it was also commanded by a British. The Germans, on the other hand, would explain that they were willing to take the steamers ride but that the captain wanted them to make the journey locked in the booths, fearing that they might take the ship under control, something they could not accept. Although one of the survivors of the Frankfurt was sick, and he followed in the "Norden", who also supplied the lifeboat the best they could before continuing to Lisbon.

The “Norden” also sent a radio warning about the presence of a lifeboat with Germans in the middle of the Atlantic. On the 9th a Portuguese aircraft from the Navy was able to locate them and sent details to the destroyers “Vouga” and “Lima”, the latter involved in the escort of the steamer "Carvalho Araújo" where the President of the Republic , General Carmona, was travelling. He himself gave orders for the escort to leave and search the shipwrecked from the "Frankfurt".

It was although the "Vouga", who departed from Ponta Delgada, Azores, that would find them on the 11th. The small ship was sighted at 19.40 hours by a lookout and the 19 men came on board between 20 and 21 hours. To prevent the lifeboat from becoming a danger to the navigation, it was shot at until it sunk.

The "Vouga" entered Lisbon on 13 August with its passengers, giving rise to a great deal of attention from the public and the newspapers that led the German Legation to promote propaganda actions that had some impact.

The commander of the Vouga, captain Lieutenant António Martins de Magalhães, received high praise from the authorities and the shipwrecked, and was also decorated by the German Navy.

The sinking of "Frankfurt"

On August 16, 1939, the "Frankfurt" crossed the Panama Canal with its final destination to be Australia. On September 6, he entered Talcahuano, in Chile, where he hoped to obtain supplies, but with the beginning of the war the port became a refuge since the Pacific and Atlantic oceans were controlled by the British.

In addition to this freighter, there was in Chile another German ship. The four-masted “Priwall” had also taken refige when the war started but was offered to the Chilean government in July / August 1941, becoming the "Lautaro", the school ship for the Chilean Navy. It would be lost in 1945 after a fire started on board.

It was around this time that the "Frankfurt" - reinforced with the “Priwall” crew - was supplied and tried to reach Germany, trough Cape Horn under the command of Captain H. Frese.

All steps taken by the Germans were being followed by the British secret services that accompanied the preparation of Frankfurt and other German and Italian units that by this time were ordered to leave neutral ports and try to reach the countries of origin.

On May 17, 1941, they departed for Cape Horne and then retreated to the port of Rio de Janeiro, Brazil, before beginning their race across the Atlantic towards Germany.

On June 26 they left the Brazilian port at full speed, but by 6:00 pm of August 3 they saw a ship in the distance trying reach them. In spite of the different manoeuvres performed during the night, they did not manage to mislead the pursuer, the auxiliary vessel "HMS Cavina", and by 00.20 the next day, when they were already very close, Captain Frese gave orders to open the valves and scuttle the “Frankfurt”. The 46 crew escaped in two boats, the one with the master was captured by the allied vessel.

The remaining 20 men managed to escape protected by the night and tried to reach the Azores that were about 600 nautical miles away, but would be picked up by the “Vouga” before arriving there.

The Lima found survivors of the American City of Flint

Shipwrecked from the British Cliftonhall helped by Angoche II