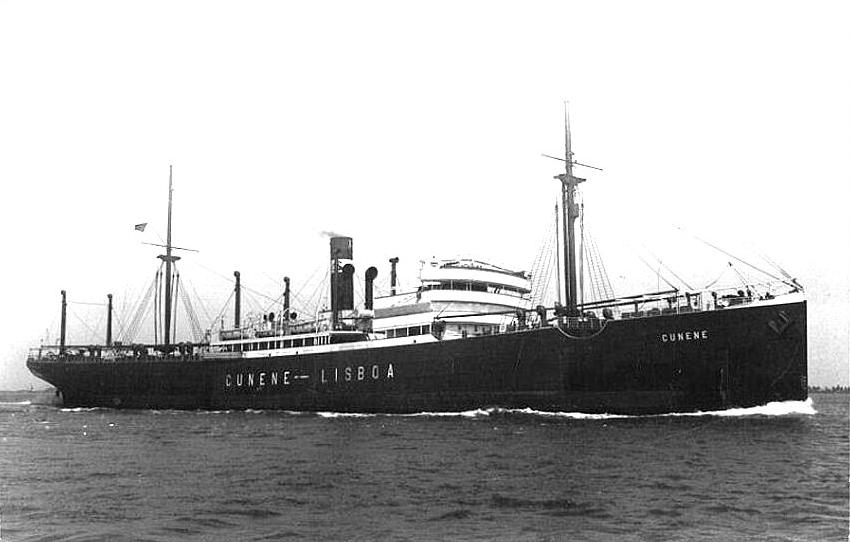 The Cunene was returning from the USA, where it had left 29 shipwrecked from the Norwegian ship Svenør, when on April 12, 1942, around noon, the crew saw a whaleboat with 12 crew members of the tanker Koll, also Norwegian, sunk a week before.

The survivors were “in a sorry state and were injured, especially the captain who had to be tied up and hoisted up because he no longer moved the limbs”, read the report delivered in Lisbon. All received some kind of medical treatment and, with the exception of the Norwegian commander, who would be hospitalized, all arrived safely in Lisbon, where the Cunene entered at 9.30 am on April, 24.

Another nine crew members of the same ship were picked up by the Portuguese steamer Lobito on April 16, which, on a journey from Lisbon to Gloucester, in the USA, saw the small rescue-vessel sailing on the starboard side. They were the mate, the second engineer, the carpenter, three sailors and 3 driver's assistants, all of Norwegian nationality, with the exception of one, who was Canadian. They were all wounded, with the second driver in a serious condition, burnt by the inflammation of oil during the torpedoing. Another man had died in the lifeboat the day before. The Portuguese treated their wounds, provided them with food and clothing.

The rescue was communicated trough the radio and, on the 17th, at the entrance of the Delaware River, in the USA, they were awaited by the American Coast Guard vessel CG-2398 who picked the survivors and took them to the base in Lewes where they would receive medical assistance. One was admitted to Beebe hospital.

The Koll was torpedoed on April, 6 while sailing from Galveston to Halifax where she was to join a convoy. The first torpedo fired by U-571 hit the engine room which caught fire killing two men and injuring two others. One of the lifeboats was destroyed, but three others were successfully launched. One, with an engine, had twelve men on board, among them the captain; another had seven, led by the first officer, while in the last one twelve other were under the orders of the second officer.

After the attack, U-571 officers questioned the Norwegians about the ship, cargo, origin and destination. The Koll had to be sunk with cannon fire and the shots spewed burning gasoline into the water, nearly killing a crewman who, on a raft, was forced to undress itself and dive.

The captain, in the motorboat, towed the others for two days until the weather deteriorated separating them. The captain was picked up by Cunene on 12 April. The one under orders of the first mate was found, on the 15th, by the Swiss freighter St. Cerge and the last one, on the 16th, by the Lobito.